The Sixth Circuit Court of Florida is located in the west of Florida, in the Tampa Bay region. It covers the Pasco and Pinellas counties. Here are some fact about the region were we practice as debt collection attorneys. 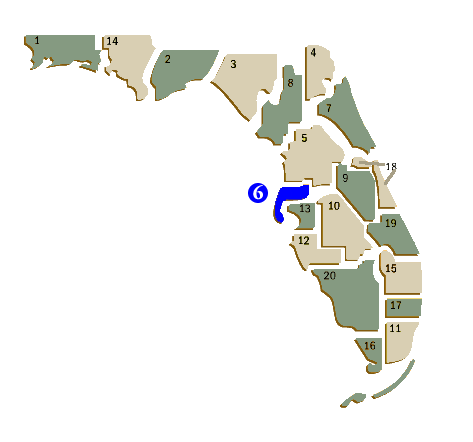 Pasco County is located on the western coast of Florida. The major cities of Pasco County are New Port Richey, Zephyrhills, and Dade City. It has a population of around four hundred and sixty five thousand and has a total area of 867 sq miles. Pasco County was named after Samuel Pasco who became a member of the US Senate. Major industries of the Pasco County are Education, Health Services, Manufacturing, and Business Services. Some of the leading companies of Pasco County are Pall Aero-power Corporation and Progress Energy. The average annual wage of the county is $32,995. The cultural events are Pasco County Fair, US National Skydiving championships and Rattlesnake Festival. The historical interests include Haunted History Tours of New Port Richey, and WWII Barracks Museum, among others. There are a number of recreational places including Werner-Boyce Salt Springs State Park, Crews Lake Wilderness Park, with activities such as fishing, jet skiing, sailing, and power boating. It’s truly appealing white beaches, make the area one of the best paradises for tourists.

Being located in the western coast of Florida, County of Pinellas has the major cities of St. Petersburg, Largo and Clearwater as its County Seat. The population of Pinellas County is approximately nine hundred and sixteen thousand and the total area of the Pinellas County is 607.67 sq miles with the annual average wage of $41,102. Pinellas County was established in 1912. Major industries of the Pinellas County are Trade, Transportation, Utilities, Education, Health Services and Professional & Business Services. The major private sector companies are Home Shopping Network, Fidelity Information Svc., Nielsen Media Research, Raymond James Financial and Tech Data Corp. The Pinellas County has a living history museum named Heritage Village spanned over 21 acres of land having more than 28 historic structures dating back to 19th century where tourists and locals can experience what life was once in Pinellas. Other historic sites of interest are Renaissance Vinoy Hotel, Sunken Gardens, Fort DeSoto Park and St. Petersburg Pier. The recreational facilities available in Pinellas County are 35 Miles of Pinellas County Beaches, Grand Prix of St. Petersburg, Professional Sporting events such as NFL, MLB, NHL, AFL and 12 Artificial Reefs. The main cultural events of the County are Clearwater Jazz Festival, Greek Wine & Food Festival and Taste of Pinellas.