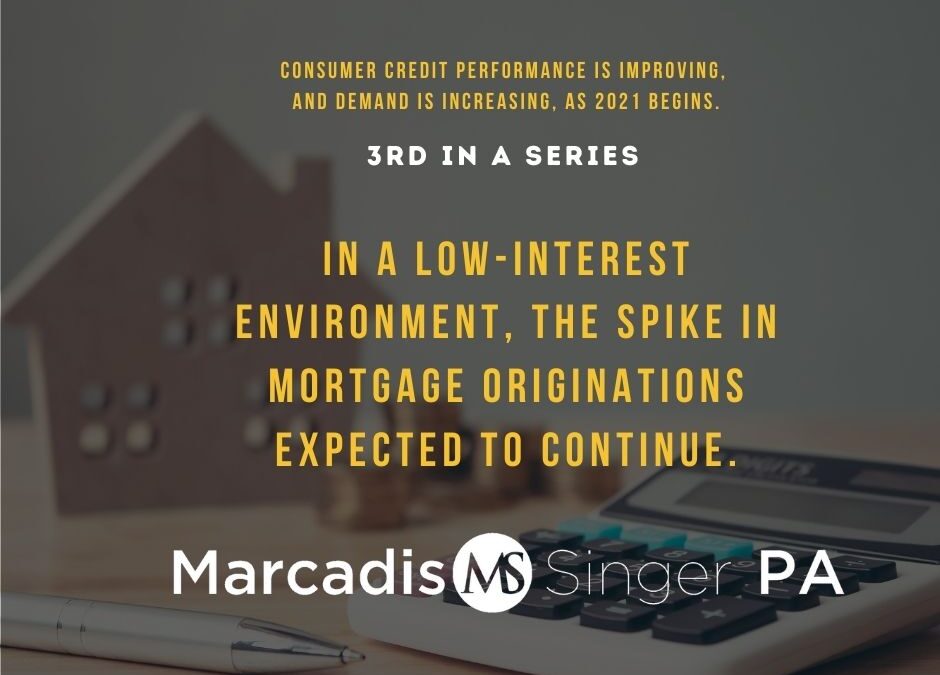 In a low-interest environment, the spike in Mortgage Originations expected to continue.

As major delinquencies declined in Q1 2021, the boom in mortgage originations persisted in Q4 2020 (viewed one quarter in arrears).

Mortgage origination volume surged by 73 percent to over 4 million in Q4 2020, compared to the same period last year. Since TransUnion began tracking the metric in 2011, this is the biggest quarterly volume ever. Refinancing accounted for 53% of the total, compared to 47% from purchase. Refinance accounted for 43 percent of share a year ago, compared to 57 percent for buy. Purchases increased by 42 percent in the prior year, while rate and term refinancing increased by 160 percent. Refinancing with cash out climbed by 64% over the previous year. Serious mortgage delinquency rates continued to plummet, down from 1.13 percent in Q1 2020 to 0.81 percent in Q1 2021, the lowest level in more than a decade. The number of accounts in accommodation status has remained high.

The mortgage market is being driven by low interest rates and growing home values. Housing demand is outstripping housing supply, leading property values to soar. At the same time, rising house values are allowing more people to refinance and take advantage of cash out refinancing. The share of accounts in accommodation status is largely to blame for the near-record lows in serious delinquent rates. While we expect delinquency rates to rise once these accounts are released from accommodation, we also expect many of these customers to do everything possible to keep their accounts current. payments and protect the equity in their homes.