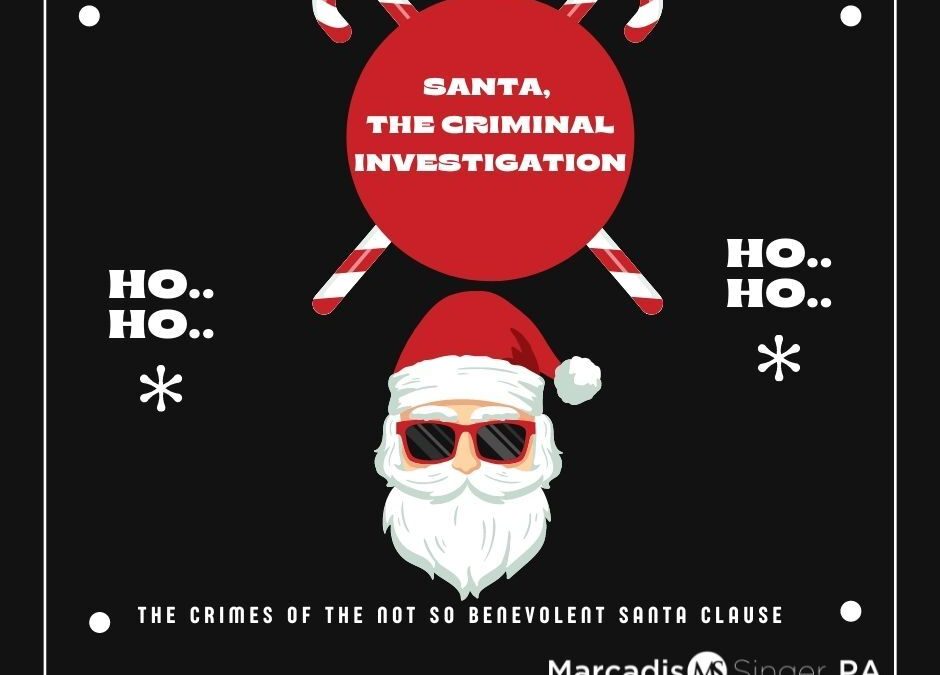 The crimes of the not so benevolent Santa Clause

Kris Kringle is dragged before a judge in the 1947 holiday classic “Miracle on 34th Street” to decide if he is insane or the genuine Santa Claus. It’s a stunning sight to put the benighted benefactor of millions of children worldwide on trial in a regular metropolitan courtroom. And it got me thinking: Whether or not Santa is a hoax is the least of his legal issues, and perhaps even a red-suited herring that’s been diverting us from the true scope of St. Nick’s misdeeds for years.

Have you ever wondered how many crimes and other misdemeanors Santa would be guilty of if he were indeed what he claims to be? Let’s start putting together the prosecution’s case against Kris Kringle. We’ll file an indictment and double-check it to see if we can figure out whether Santa is good or bad.

First, let’s look at the most obvious: Santa is the Al Capone of house invasions, and he might face several criminal trespasses and burglary charges. Of course, Santa isn’t your usual thief — in fact, he is the “polar” opposite of a thief — however, the point is moot, as burglary is more about defending the sanctity of a person’s house than it is about preventing theft. Roughly a third of all burglaries occur when someone is there.

Santa only needs to establish that he intended to commit a crime within the building to be found guilty of burglary, and the intent to steal a little liquor and a snack while inside could be enough.

Isn’t it true, though, that Santa has our permission to visit the premises? I wouldn’t feel comfortable holding up a property owner’s child’s Christmas wish list in court as proof of the owner’s implied authorization to visit the premises unannounced at night if I were him. I’m guessing that a significant number of the millions of chimneys he slips down on Christmas Eve haven’t offered any such documentary evidence of approval.

Santa is engaged in a global monitoring effort that makes the NSA appear like many ham radio enthusiasts, well before his annual Christmas Eve crime spree. Sure, disgruntled parents provide Santa with a lot of information for his massive “naughty-or-nice” list but knowing when each of the estimated 526 million Christian children under the age of 14 is sleeping — and when they are awake — necessitates a remarkably intrusive spying operation, for goodness’ sake.

We can only speculate on the advanced equipment required to carry out such intelligence gathering, but it is easy to see how it would violate most privacy rules.

Infractions of Labor and Employment Law Santa is also the President/Dear Leader of a fascist Arctic work colony. There is no proof that the elves who work in the North Pole’s toy factory are paid anything other than lodging and board, making them more akin to serfs working on their lord’s estate than paid employees or even independent contractors. It’s also challenging to think that Santa gives any elf pensions or disability benefits, or that he has adequate workplace safety measures in place.

Fortunately for St. Nick, he operates his feudal workshop in international waters. While the Maritime Labor Convention of 2006 establishes minimal rights for maritime workers, enforcement of such measures against predatory, seafaring bosses like Mr. Kringle is only irregular.

We’re only getting started. The list of Santa’s potential criminal and civil liabilities is long, and it includes:

Forcing eight or nine captive reindeer to engage in a mind-boggling performance of globe-trotting labor appears harsh and immoral, and would be intentional, purposeful harm to an animal.

Even if you had a superhuman tolerance for alcohol, ingesting tens of millions of units in less than 24 hours will result in some highly impaired sleigh driving.

Naughty kids may be deserving of those lumps of coal in their stockings, but that’s no excuse for the emotional distress that follows.

How else to describe the nonconsensual embracing of millions of youngsters on Santa’s lap every year at the mall but aggravated assault?

In some U.S. states, if a third party observes  Mommy kissing Santa Claus, daddy can sue that for interfering with his marriage.

Invading sovereign airspace and transporting contraband over international boundaries are both illegal.

Without a doubt, Santa has a monopoly on the Christmas present industry, and giving away commercial things for free limits competition and harms competitors.

While the massive losses he accrues from gifting the estimated $142 trillion in toys he creates may negate any income tax responsibility.  If a court were to designate employees, he could owe various additional customs and taxes for his operations, including payroll taxes for his elves.

In short, merry St. Nick would require a jolly good lawyer, presuming we could apprehend and prosecute him in the first place.