The Seventh Circuit Court of Florida is located in the east of Florida. It covers the following counties of Flagler, Putnam, St. Johns and Volusia. We serve the region as reliable debt collection attorneys and here we have come up with some information that will help you. 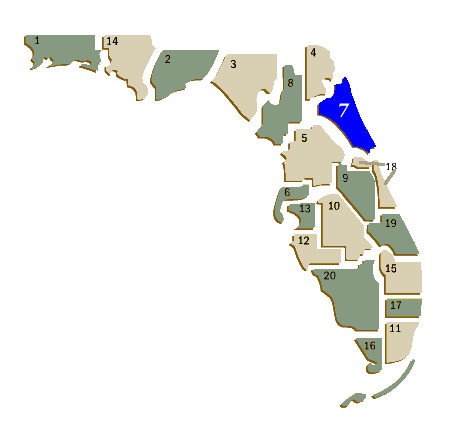 Being created in 1917, Flagler County was named after Henry Morrison Flagler who built Florida East Coast Railways. It is located on the East coast of Florida. The population of Flagler is more than Ninety Five Thousand Six Hundred and the area is 570 sq miles. Its major cities include Palm Coast, Flagler Beach and Bunnell also its County Seat. With the annual average wage of $30,882, its main industries are Transportation, Utilities, Leisure & Hospitality, Professional & Business Services, and Trade. An important role is played by the private sector companies like Palm Coast Data, Publix, Hammock, Beach Resort and Wal-Mart. The recreational options include Intra Coastal Waterway, Crescent Lake, and 24 Community Parks. The historical places of Flagler County are Washington Oaks State Gardens, Princess Place Preserve and Flagler Beach Historical Museum. Some cultural events organized are Columbus Day, First Fridays on Flagler Beach and Creek side Festival.

Putnam County is located in the north-east part of Florida. It was created in 1849 and was named after Benjamin A. Putin, a soldier of war in the First Seminole War, also a Lawyer, a legislator and the first president of Florida historical society. The population of Putnam County is approximately 74,364, and the area of the Putnam County is 827 sq miles. Also, the average annual wage of Putnam counts for $33,990. Main cities include, Interlachen, Crescent City and Palatka as the County seat. The major industries of Putnam County are Manufacturing, Public administration, Trade, Transportation, and Utilities. The public sector plays a significant role in the progress of the County companies like Georgia Pacific, Wal-Mart, Precision Response Corporation and Seminole Electric Corporation. Historical importance of the County of Putnam is showed by its David Browning Railroad Museum, Bronson Mullholland House, and Fort Gates Ferry. With recreational places like Palatka Historic Districts (North & South), Dunn’s Creek State Park, Putnam County Recreation Dept., and Ocala National Forest, you can enjoy Horse Riding, Hunting, Fishing, Canoeing, Hiking, and many more at the Putnam County.

St. Johns County is located at northeastern side of Florida, and it was created in 1821 when the Onis- Adams treaty was signed by Secretary of State John Quincy Adam with Spain. County of St. Johns has a population of 190,039 with the average annual wage of $36,148. In the covered area of 821 sq miles, main cities include Hastings, St. Augustine Beach and St. Augustine as the County Seat. Major industries of the St. Johns County are Leisure & Hospitality, Transportation, Trade, Utilities, Education, and Health Services. The private sector companies are Northrop Grumman, PGA Tour Inc., Ponte Vedra Inn & Club and Marriott at Sawgrass Resort. The recreational options of St. Johns County are The Players Championship on the PGA Tour, Ancient City King Fish Tournament, and World Golf Village Hall of Fame.

We pride ourselves in serving the Seventh circuit court of Florida as debt collection attorneys.