The Fourth Circuit Court of Florida is located in the north east of Florida. It covers the counties of Clay, Duval and Nassau. Since we are a group of debt collection attorneys in the region, we have decided to share with you some valuable information about the fourth circuit court of Florida. 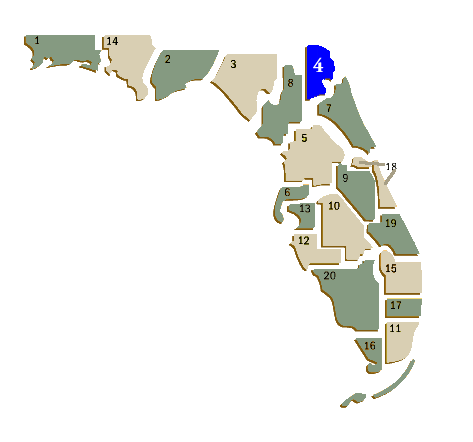 Clay County is located in the northeast of Florida and has some major cities such as Orange Park, Green Cove Springs and Keystone Heights. It has a population of roughly one hundred and ninety thousand and an area that stretches over 643 sq miles. The average annual wage of Clay County is $32,238 as per the census of 2010. The main industries are Vacuum and Pumping Systems manufacturing and Electric Power. Clay County hosts AT&T the telecom giant and is home to Florida Power and Light. Among some of the famous activities are outdoor sports such as hiking, biking, swimming and boat races. The best known places of the County of Clay are Gold Head Branch State Park, Green Cove Springs Old Courthouse & Historic Triangle and Camp Blanding museum.

Duval County is located quite near the north eastern tip of Florida, and it shares a border with the Nassau County. The major cities in the County of Duval are Jacksonville, Jacksonville Beach and Atlantic Beach. It has a population of roughly 865,000 and an area of around 918 sq miles. The average annual wage of Duval County is $45,000 as per the census of 2010. This shows that Duval is a flourishing county, and this reflects in the various companies they have in their county such as Citi and Bank of America, AT&T and United Parcel Service. The main industries of Duval County are trade, banking, railroads, and IT services. It is loved for its sunny beaches and also hosts historical places such as Jacksonville Maritime Museum.

Nassau County is located in the north eastern tip of Florida, and it also has the Atlantic Ocean on its north and east with borders of Duval County in the south and Baker County on the southwest. The three biggest cities are Fernandina Beach, Hilliard and Callahan. Nassau has a population of roughly 73,000 and an area of around 726 sq miles. The average annual wage of Nassau County is $37,186 as per the census of 2010. The main industries of Nassau County are Business Services, Tourism, manufacturing and retail. Some of the leading companies in the county include Wal-Mart, Winn Dixie Stores Inc, and it also has the Ritz Carlton Hotel. County of Nassau is best known for its sandy beaches and golf courses and hosts historic places such as the Amelia Island Museum of History.

We consider it a true privilege to serve the fourth circuit court of Florida as debt collection attorneys.