The Fifth Circuit Court of Florida is located in the Midwest of Florida. It covers the counties including Citrus, Hernando, Lake, Marion and Sumter. Here is a comprehensive guide about the region where we offer our services as debt collection attorneys. 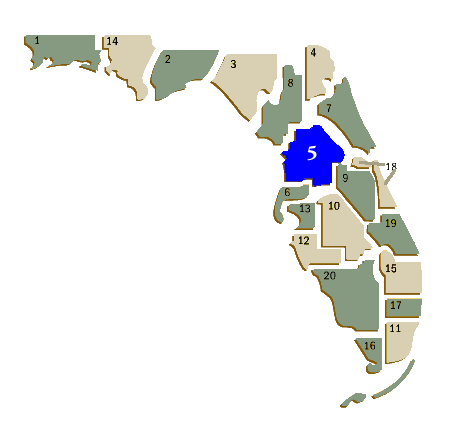 Citrus County is located in the Midwest of Florida and has some major cities such as Inverness and Crystal River. It has a population of roughly 141,000 and an area that stretches over 713 sq miles. The average annual wage of Citrus County is $34,678 as per the census of 2010. The main industries of Citrus County are education, utilities and correctional facilities. They have Progress Energy as one of their leading companies. Some of the fun activities of Citrus are wildlife refuges and parks while the best known places are Coastal Heritage Museum and State Arch.

Hernando County is located quite near Midwest of Florida, and it shares a border with the Citrus County and Sumter County. The major cities in the County of Hernando are Brooksville and Weeki Wachee. It has a population of roughly 173,000 and an area of around 589 sq miles. The average annual wage of Hernando County is $30,767 as per the census of 2010. The main industries of Hernando are distribution, electronics manufacturing, stone mining and insulation products manufacturing. Some of the best known companies that are located in Hernando County are Wal-Mart Distribution and Progress Energy. Also, the place is loved for its outdoor activities such as biking and fishing and for the Brooksville Train.

Lake County is in the eastern side of Florida next to the Orange County, and it was created in 1887. It was named after numerous lakes in the area where there are nearly 1,400 lakes. The population of the Lake County is about two hundred ninety seven thousand with area of 1,156.40 square miles and with the annual wage of $32,219. The largest cities of the Lake County are Leesburg, Eustis, Clermont and Tavares as the County Seat. The major industries of Lake County consist of Trade, Transportation, Utilities, Education, Health Services, Leisure & Hospitality and Professional & Business Services. The Private Sector companies of Lake County include Leesburg Regional Medical Center, Wal-Mart Super Centers, and Villages of Lake Sumter and Publix Supermarkets. The Recreational Opportunities of the Lake County comprise Camping, Bird watching, Hiking, Boating, Fishing and Sailing. The historical points for tourists’ interest are Eustis Historical Museum, Lake County Historical Museum, Mount Dora Historic District, and Center for Arts, Museum of Speed and Presidential Museum Inc. The cultural events organized by the Lake County Central Florida Dragon Boat Festival, Tavares Train Festival and Lakeridge Winery Harvest Festival.

Marion County is in the mid west side of Florida adjacent to Citrus County. It was created in 1844 and named after General Francis Marion a hero of American revolutionary war. The largest cities of Marion County are Ocala, Belleview and Dunnellon. The population of the Marion County is approximately 331,298 with the annual average wage of $33,014. Also, it covers an area of 1,663.01 square miles in total. The major industries consist of Transportation, Utilities, Education, Health Services, and Trade. The private sector companies of Marion County are Munroe Regional Medical Center, AT&T, Lockheed Martin and Cheney Brothers. Some of the recreational attractions are Don Garlits Museum of Drag Racing, Rainbow River and Silver Springs. The cultural events organized by Marion County are Horses in the Sun and Ocala Symphony Orchestra.

Sumter County is located in the west part of Florida, and it was created in 1853 and was named after a hero of American Revolutionary War General Thomas Sumter. The population of Sumter County is more than 93,420 within an area of 580 sq miles. Its major cities include Wildwood, Bushnell and Webster. With the annual average wage of $ $32,738, its main industries are Education, Health Services, Transportation, Utilities, Leisure, and Public administration, Hospitality, Business Services and Trade. An important part is played by the private sector companies like Sumter District Schools, Wal-Mart Superstore, and Sumter Electric Cooperative. The recreational opportunities consist of Green Swamp Wildlife Management Area, Croom Wildlife Management Area and The Baird Unit (Hunting). The historical places of Sumter County are Dade Battlefield State Historic Site, Cypress House, Veranda House and The Florida National Cemetery. Cultural events organized by the Sumter County Bushnell Fall Festival, Dade Battle Reenactment, Spring Festival and Sumter County Fair.